The fun factor and flow of a twinny, the performance chops of a shortboard – the FishBeard is surfboard cross-pollination at its finest, and a beautiful-looking board to boot.

It was Parker Coffin who had the Eureka moment: “A Neck Beard 2 would work sick as a keel-fin fish!” So, master craftsman Britt Merrick got to work, reimagining the back half of the Neck Beard 2, tinkering with the template, rocker and fin set-up, making subtle as well as swingeing alterations…

It's a board that subscribes to the “business in the front, party in the back” philosophy. The FishBeard’s still got the Neck Beard DNA that so many surfers have come to know and love, but it has a more playful streak, too, courtesy of the aft section: the freedom, the fruitiness of two fins rather than three.

You’ve got all the drive, speed and flow you ever wanted, centred around a front-foot sweet spot so large that it’s basically unmissable. Then when you engage the fins and rails with the back foot, the finely poised balance of pivot, hold and projection allows you to really rip into turns, surf aggressively, go vertical or even get above the above the lip. Or of course, just flow and cruise and draw the kind of classic twin-fin lines that are inaccessible to standard performance thrusters. The key thing is, though, that while it retains that uniquely enjoyable squirrelly twin-fin sensation, it’s not one of those twinnies that just goes from side to side (the standard complaint against twins).

We’ll let Britt, son of Al and head shaper at Channel Islands, break down some of the particulars (and see the below video for more).

“The thing about the FishBeard that sets it apart from a different fish is it’s got characteristics that make it more performance-oriented – one being the outline of the board. If you look at typical fishes, they usually have a pretty wide and a pretty wide tail, so that dictates it’s a fairly straight outline – when you connect that nose and that tail the only way to go is really kind of a straight outline.

“So what we’ve done with the FishBeard, to try and make it a little more performance, is add a little more curve to the outline, so when you look at the nose of the board, it looks more like a shortboard than it does a fish. It’s still got width so that it has all the speed and flow that you want from a fish, but we’ve shed as much of the width as we can to move it toward more of a performance fish.

“And then the same with the tail, the tail’s got a little more curve, it’s a little more pulled-in than the average fish. So all that creates an outline that’s not [merely] lateral – that’s the problem with a lot of fishes, they’re just so lateral in the way that they surf. This one allows you to surf more up and down.”

PLEASE NOTE: The exact placement and colour of the logos may vary somewhat. 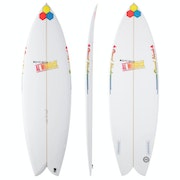