Note: If the size you're after isn't in stock, you can still order it today. Fourth will shape it especially in their Newquay factory, and it will be dispatched directly to you in 6-8 weeks' time.

The Doofer is anything you want it to be. From gutless mush to solid waves it is the ultimate all-rounder when you want to catch as many waves as possible and have a bunch of fun. A great paddler, fast, easy to turn and holds a lovely line in the barrel. The Doofer came about from the Fourth team asking for a board that would be a bit of everything for when they travel. It is essentially a hybrid board.

The concave is that of a charge model from the tail to the wide point with a single running slightly deeper through the nose, helping it with paddling and lift in the water when you need to maintain your speed on the smaller waves but really gives it some hold when you are surfing off the tail-pad in bigger waves.

If you can only have one board in your quiver then the Doofer is for you. Providing confidence in bigger surf and wave count in smaller surf, the Doofer is the ultimate all rounder. Ride the Doofer just over the volume of your go to shortboard - it handles foam well so don't be scared of having too much volume with the Doofer.

The Base Construction (a polyurethane blank with polyester resin) is still considered the most versatile and all-round performance specific construction used the world over by touring surf professionals. At Fourth Surfboards only premium materials are used to produce top-quality boards; US Blanks at the core in blue foam and Hexcel Glass for the laminate bonded with Silmar resin for best balance between weight, performance and durability.

The Fourth construction method sees the board finished in 24/7 heat controlled environments to ensure curing times are at optimum levels to reach a finish unrivalled in Europe. The board is then sanded to a 240 dry sand finish ensuring that there is zero plastic lacquer on the board that can often look and feel horrible after a couple of months in the ocean 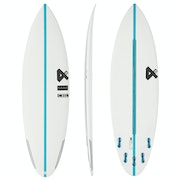