From 1-2ft beach-break fare to 6ft barrels, the Hypto Krypto can pretty much do it all. The ultimate one-board quiver?

A master stroke of surfboard design, the Hypto Krypto is among the most popular and influential surfboards ever, the model every other shaper wishes they came up with.

The design is reminiscent of older single fins and fishes in the distribution of foam, but not in such a way as to hamper performance, and it's all very smoothly done with the continuous flowing curves that are typical of Hayden Cox's boards. These curves actually lend themselves to a continuous flowing style of surfing – witness Ando in the video below for a prime example.

“It’s a good board for trimming, for your average surfer that wants to have fun – you can go fast and turn really good, and it’s got a bit of release too," says Ando, summing up the merits of the board he's become synonymous with. “I guess people like it just because it’s easy. You can paddle in, you can get a ton of waves, it rides really fast and it’s exciting… that’s what people look for in surfing, or I do, at least.”

It's a great paddler, and the flattish rocker and abundance of foam under the front foot make it go in small waves. But the pulled-in tail distinguishes it from a typical "funboard", and gives it the hold necessary to handle more solid conditions.

It's no less versatile in terms of the types of surfer that can benefit from it. That's the other remarkable thing about the Hypto – it goes just as well for lower-end intermediates as it does for Ando-level pros.

As ever, adjust the size according to weight and ability – this will generally mean a good few inches shorter than your standard shortboard. If this will be your first shortboard, anywhere in the 6'0"–6'6" range will be about right. With plenty of volume packed into a short space, it's a great model to ease the transition from a mini-mal.

The FutureFlex construction, unique to Haydenshapes, is built around a stringerless EPS blank, which is strengthened and given its unique flex properties by the combination of the biaxial fibreglass, epoxy laminate, and carbon frame along the rails. New to the Hypto this year is the black-circle branding – a lovely touch – available here in Europe for the first time. The carbon-tape double pinline is also new, bordering that iconic parabolic frame.

This board comes with Futures fin boxes in a 5-fin set-up for maximum versatility (we may also have the FCS II elsewhere on the site). The Hypto Krypto is often referred to as the ultimate one-board quiver, but if you want sharper definition and increased hold in head-high surf and upwards, there's a Hypto Krypto Step-Up that's just been added to the range, and that's definitely worth considering too. 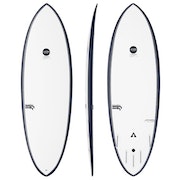