Consistently one of our best-selling fish shapes over the last few years, Mark II of Maluku’s Fish Cake model winds the clock back and infuses the original Fish Cake with a healthy dose of retro flair. It’s still a firmly contemporary design, but has added a slight indent or “wing” to the rail line just before the rear fin, in the manner of an MR twin fin from the early ’80s. The other main change is the incorporation of the 5-fin set-up, maximising the versatility of an already hugely adaptable design.

The idea of the wing is to keep the rail lines relatively straight (this is where much of the board’s speed will come from) while pulling the tail in to create a looser, more responsive board. This narrower tail will make it easier to initiate turns, as will the wing itself, which effectively provides an additional pivot point. It should also give you some extra confidence and hold when the waves pick up to the head-high mark and over.

You’ll notice, however, that the Fish Cake benefits from a more pronounced rocker profile than a traditional fish. It’s still only moderate, so won’t compromise its glide or paddle power, but the increased curve enables the board to fit into steeper parts of the wave face more naturally and utilise the pocket more fully. The bottom shape is likewise tweaked to offset the board’s generous dimensions: both the double concave and the vee will encourage the board to roll from rail to rail and turn more sharply, which might otherwise be difficult on a board this wide.

With its extra volume and stability the Fish Cake would make an excellent first shortboard. It paddles effortlessly, which means (crucially) that you’ll catch more waves, and won’t be too knackered to surf them when you do; meanwhile it doesn’t require the fast-twitch reactions of a jungle cat to generate speed on it. But the Fish Cake the snappiness to allow a more vertical approach, appeasing more experienced surfers in search of a high-volume hybrid shape.

A thruster set-up will be most people’s go-to, but the extra two fin boxes give you the freedom to experiment. Four fins will give you some extra speed and forward drive, and may prove a good option on smaller days; if you like the sensations of a twin fin, this board will go great as a 2 + 1 with a small trailer fin.

This board is perfect from 1ft all the way to 6ft. It's built incredibly well and my go to board for UK & Europe waves. 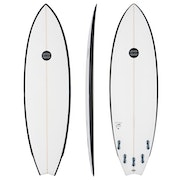