One of the most iconic shortboard models of recent years just got a high-performance upgrade.Features:

The Ghost Pro is still the Ghost – same shape, same DNA, same magic combination of rocker curve and concave and outline – but with a little of the excess fat trimmed away. This resizing will chiefly benefit those looking to wield a shortboard with a little more precision, or those after more of a step-up or travel board that can handle some serious juice. It's a board for more confident surfers, but you don't have to be a pro by any means.

You should know the deal with the Ghost by now – John John Florence’s weapon of choice in decent waves, wide point and volume pushed forward with a pretty low entry rocker, offset by a foiled-out aft-section with knifey rails, pulled-in tail and exaggerated exit rocker. Basically the front half of the board gives you a load of paddle power and drive, and the back half is where all the looseness and performance is, allowing you to really harness that speed. It's a lethal combination.

You get a bit of a step-up look and feel, but the Ghost is much more versatile than that descriptor would suggest – it works as a high-performance shortboard, and isn’t limited to solid surf.

Having said that, it does thrive when the surf has some power to it. John John’s best performances on it (think Margaret River, pumping J-Bay etc.) give you an idea of where the Ghost will work best. 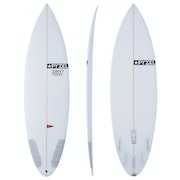