Say hello to the newest member of the celebrated Ghost family. It's an absolute beaut.

Shaped by Jon Pyzel at the behest of chief test pilot John John Florence, the Shadow joins the illustrious ranks of the Ghost, the Phantom (step-down), and the Gremlin (step-down x 2). It may be the best one yet.

The Ghost was a borderline step-up, still versatile but best suited to good waves with some power behind them; the Phantom was designed for average and below-average waves lacking in power. This board's somewhere between the two – you might lose a bit of resolution at the extremes (i.e. very big or very small surf) but if you want sharpness and precision in the in-between range this is the one.

The Shadow takes the Phantom as its starting point, keeping the flow and glide but shaving a little foam off the front half and upping the entry rocker somewhat. Other features include an exquisitely subtle hip in line with the front fins and a slightly pulled-in squash tail. Its wide point is now dead centre, which marks a departure from the rest of the Ghost family and gives the outline a more conventional high-performance feel.

The result is a looser, more sensitive board that encourages a vertical approach and is better adapted to tight turns and critical surfing. It’s a permanent fixture in the quivers of Florence and Freestone (among others), and comes in a thruster set-up with Futures fin boxes. Order at about your height. 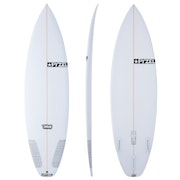