The Doofer is anything you want it to be. From mush to solid waves it is the ultimate all-rounder when you want to catch as many waves as possible and have a bunch of fun. A great paddler, fast, easy to turn and holds a lovely line in the barrel. The Doofer came about from the Fourth team asking for a board that would be a bit of everything for when they travel. It is essentially a hybrid board.

The concave is that of a charge model from the tail to the wide point with a single running slightly deeper through the nose, helping it with paddling and lift in the water when you need to maintain your speed on the smaller waves but really gives it some hold when you are surfing off the tailpad in bigger waves.

If you can only have one board in your quiver then the Doofer is for you. Providing confidence in bigger surf and wave count in smaller surf, the Doofer is the ultimate all rounder. Ride the Doofer just over the volume of your go to shortboard - it handles foam well so dont be scared of having too much volume with the Doofer.

Lightweight, strong, dent proof all with a natural flex pattern to ensure performance in a wide range of conditions. When you have a board that is very strong in terms of impact resistance usually you have a board with stiff flex patterns which will feel chattery on the face of a wave and be hard to control, especially at higher speeds. The F1X construction method rivals the compression strength of sandwich construction epoxy alternatives but adds a better natural flex pattern to allow for ease of use in a wider range of conditions. 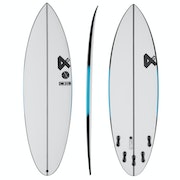